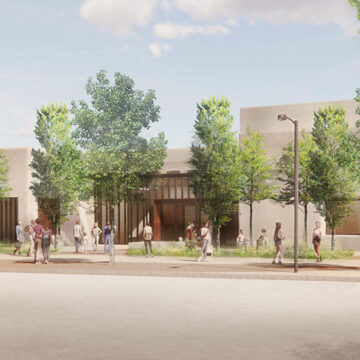 The Georgia O’Keeffe Museum is excited to announce the new O’Keeffe, a bold and inclusive vision to create a world-class museum facility and community green space in downtown Santa Fe

The Georgia O’Keeffe Museum, in Santa Fe, New Mexico, opened to the public in July 1997, eleven years after the death of our namesake artist. A visit to the O’Keeffe Museum offers insight not only into the artist’s paintings, but also her creative process and the light and landscape that inspired her. In addition to the main Museum campus in Santa Fe, the O’Keeffe Museum maintains O’Keeffe’s two homes and studios in northern New Mexico, a research center and library, and a variety of collections relating to O’Keeffe and modern art.

One of the most significant artists of the 20th century, Georgia O’Keeffe (1887-1986) was devoted to creating imagery that expressed what she called “the wideness and wonder of the world as I live in it.” O’Keeffe’s images—instantly recognizable as her own —include abstractions, large-scale depictions of flowers, leaves, rocks, shells, bones and other natural forms, New York cityscapes and paintings of the unusual shapes and colors of architectural and landscape forms of northern New Mexico.

The Museum’s collections of over 3,000 works comprises 140 O’Keeffe oil paintings, nearly 700 drawings, and hundreds of additional works dating from 1901 to 1984, the year failing eyesight forced O’Keeffe into retirement. Throughout the year, visitors can see a changing selection of these works. In addition, the Museum presents exhibitions that are either devoted entirely to O’Keeffe’s work or combine examples of her art with works by her American modernist contemporaries.

In 2006, the Museum took responsibility for the care and preservation of O’Keeffe’s home and studio along the Chama River in Abiquiu, New Mexico, about an hour north of Santa Fe.  A national historic landmark and one of the most important artistic sites in the United States, the home where the artist lived and worked is open for tours by appointment. O’Keeffe’s first home in New Mexico, about 30 minutes northwest of Abiquiu at the Ghost Ranch is also cared for by the Museum though it is not currently open to the public.

Educational programs at the Museum serve more than 7,100 students and adults per year with a robust slate of workshops, lectures, conversations, and classroom activities.